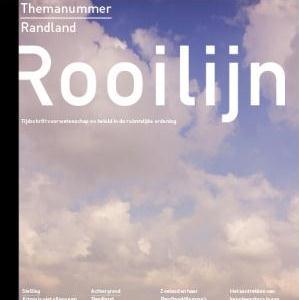 The Dutch demographic situation is characterized by growth in the center of the country (Randstad) and shrinkage in the bordering regions. The Randstad dominates many aspects of life in the Netherlands. In this respect, border areas follow what happens or is thought through in Randstad.

The Journal for scientific and policy issues in spatial planning from the University of Amsterdam, Rooilijn, published in November 2015 a special issue on Randland (borderland). In this issue the growth and shrinkage principles are being reflected upon and the attention is given to the interesting developments that can be found in Randland.

In their opening article, editors Meier, Reverda and Van der Wouw look for alternative ways to describe the dynamics of Randland. They clarify the division between two faces of the Netherlands (Randstad and Randland). Editors play with the notion of Randland (meaning border land, or edge, margin land) in order to provoke new ideas and challenge the growth paradigm ruled from the growing center of the country. On the basis of the three shrinking regions: Limburg (urban shrinkage), Zeeland (between village and a town) and Groningen (shrinking villages), they express the value of Randland.

Randland is an experiment area where shrinkage is the guiding principle for the design of the society. In this respect need to consider endogenous qualities and bleibeperspektive. In other words a positive connection with an area can be a trigger for innovative thinking and possibilities for new scenarios. In this way Randland can be leading in the sustainable organization of the Dutch society in the future as it implies that success is not only measured with growth.

All other articles follow this stream of thought and explore developments in Randland according to it. In this issue many topics related to the specific situation in Randland are tackled. Articles on rural and urban shrinking: culture of degrowth, citizens’ initiatives, neighbourhood companies, young women and their experience of city development, attracting young knowledge workers as well as interviews with directors of higher education institutions in the shrinking provinces.