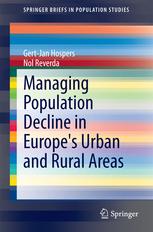 There is no way around demographic change: the future of many developed countries is characterized by shrinking and ageing population. This development implies many challenges for Europe’s urban and rural areas. Demographic change is getting on agenda of academics, policy makers and many other stakeholders. In particular, population decline is discovered as a relevant topic.

In their book*, Managing population Decline in Europe’s Urban and Rural Areas, Gert-Jan Hospers and Nol Reverda provide a valuable asset to the population decline discourse by discussing this phenomenon  from demographical, geographical and sociological point of view. The focus of this book is on the population decline as a transformation process. More specifically they are interested in the way in which people connect with each other: in other words on the impact of this development on the social structures. Namely, so far population decline discussion has been primarily led by spatial planning and policy research. New perspectives and insights presented in this book provide alternative tools for the analysis of this complex phenomenon. Clear style of writing makes this book easy to read and thus open for the variety of audiences. This book is quite informative as many examples and best practice cases illustrate the points authors are making.

The authors start by giving general insight in the concept of demographic change and demonstrate main trends (Chapter 1 and 2). Interesting analysis of the definition of shrinkage illustrates the development of this concept: from strictly demographic phenomenon towards adding diverse aspects to the definition (such as economic downturn, deindustrialization, social problems, etc.). They go on to discuss the relation between growth and decline by focusing on planning, in particular the challenges of planning in the situation of population decline (Chapter 3). The natural exchange of growth and decline is illustrated with many historical examples placing current trends in population decline in a context and discovering the possible positive aspects of this developments: sustainability, avoiding catastrophic statements, advantages of surplus, etc. The link is made with policy strategies which often aim to create growth like conditions. A plea is made to ‘plan without plans’ (p. 27).

Geographical exploration of this phenomenon (Chapter 4) gives an insight into migration developments through the history. It looks at exogenous and endogenous developments by introducing Myrdal’s theory of cumulative causation: the fact that the areas affected with population decline end up in a negative spiral which ultimately leads to continuous population decline. However, the authors plea for avoiding a cliché of doom scenarios. Namely, many endogenous and exogenous factors play a role in the development of the area. Then, the authors introduce a well-known typology of policy reactions to population decline: Trivializing, countering, managing and utilizing. Illustrated with many examples.

This chapter functions as a bridge to the next one (7) which suggests analyzing of the society (in the situation of shrinkage) by using 6 qualities (physical, ecological, economic, social, cultural and political quality) as a basis. This approach analyses various aspects of population decline implying its relevance for different aspects of the society.

Chapter 8 presents a plea to be creative with population decline by saying goodbye to narrow mind politics, reconsidering quality of life without (many) facilities and re-use of the social capital (of the elderly). The book finishes with an exploration of the creative possibilities in the situation of population decline and statements regarding the appropriate management of the population decline.

In the last chapter suggestions are given for the good management of the population decline. These raise some paradoxical issues. Naturally, with a phenomenon so complex simple solutions are not possible. In this respect an audience looking for the clear cut answers as to how to manage the population decline won’t be satisfied.

Likewise, the authors provide a lot of valuable ideas and propositions. However, in a certain respect the book also raises more questions than it answers. By raising interesting hypotheses and suggesting potential relationships it can be experienced as a research agenda rather than the book that gives all the answers to population decline.